This is a commissioned painting, for the Healing Words Project. Still  a few layers to go before it’s done. 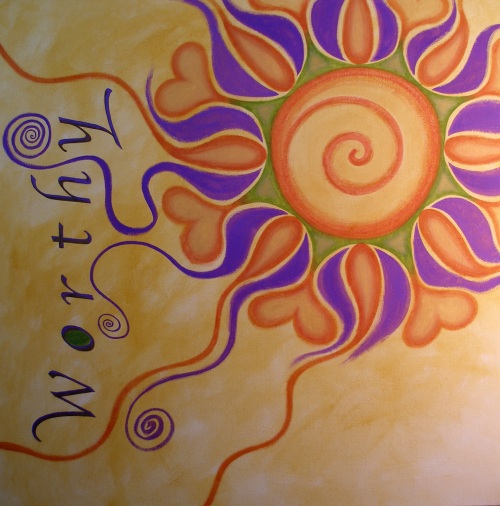 I guess it’s time for a follow up to my “If They Could See Me Now” blog post from last week. It seems I had a bit of clearing to do. I am always amazed at how the Divine/God (insert whatever you call your higher power) sends me messages, signs if you will. Last Thursday, the day after I posted the previously mentioned blog post, I decided to take the day for meditation, journaling and “clearing”. Or at the very least, taking it easy on myself. No more beating myself up and treating myself badly. Why do I do that anyway? So, I started out the day with a nice meditation, with the question in my mind; what do I still have left to clear so I can feel good about myself? I still had a deep sense of unworthiness, a feeling that I was no good. Almost as quickly as I closed my eyes with this question in my mind, the answer popped in to my head. Oh yes, now I get it! Now I understand why I feel like a scared 14 year old every time I beat myself up.

I’m not going to get into specifics on the story (not sure about the statute of limitations!), but there is something I did when I was 14 that I am incredibly ashamed of. It’s the one, big, bad thing I did in my life. Or at least, that was what I had built it into in my mind. I had let the guilt get to me and let it fester into this horrible, unforgivable act. At the time, I got away with it, probably the biggest lie I ever told, or at least I THOUGHT I had gotten away with it. I probably suffered more by holding on to it than I would have if I had fessed up and taken my punishment. Big lesson learned there! 🙂

It felt so good just to KNOW what my problem was! However, I still had to CLEAR it and to clear it completely I was going to have to tell my best friend, the one I had wronged at the time. She has been my best friend for most of my life and she has always been there for me. No wonder I felt so much guilt, I did this terrible thing to her and she was still there for me. Some time that morning, this friend commented on my facebook status. This is not usually a big thing, but this day it was as if the Divine were shouting at me “YOU MUST TELL HER!” This friend RARELY gets on facebook! It was a direct sign as far as I see it.

I started out by telling my husband, my other best friend. It took me forever just to get the words out. When I finally did, he laughed. He thought there was no way she would still hold this against me after all these years. He said he could even hear her laughter as I told her the sad truth. I have held on to this confession all these years because I was afraid she would disown me as a friend. OK, so Aaron thought it would be OK. Still, I was pretty frightened to tell her what I had done.

It was hours until I was able to talk to her on the phone, perhaps it was my final punishment for keeping this secret for so long. When I finally finished skirting around the issue, she tells me “just spit it out, I already know what it is and I love you anyway!” So, I spilled the beans and she laughed, and I laughed and we reminisced about how silly we were as teenagers. She had known at the time that I was guilty, but she didn’t push the issue, she never did. What an awesome blessing to have such an amazing friend! AND I feel totally CLEAR! I have been floating around on a cloud ever since!

This is not the end of the story however. All these years I have been beating myself up, telling myself I’m unworthy. Because of something stupid I did when I was 14 years old. As if putting an exclamation point at the end of the sentence, the Universe decided to send me one more sign. On Monday morning I received an email with notification that I had been chosen to create a painting for the Healing Words Project. I signed up for this project at least a year ago and had completely forgotten about it. For this project, someone donates money and they pick an artist to make a painting based on an inspirational word or quote. This painting will be hung in the New Day Youth & Family services building to help encourage teens. Can you guess what my word is? OK……wait for it……

WORTHY! Yes! What a knock over the head THAT was! I will paint this one for myself as much as for the teens that will see it hanging. Thank you Divine, for showing me the way!

Posted in 2012, bio, commission, friends, inspiration, my story, random things about me