“Coming Out of the Dark”, 12 x 12″ oil on canvas, near completion WIP. Two paintings in one as this was painted over another painting I didn’t like!

My life has been so busy since my last post! I spent a good month working on my plans that I talked about in “Inspiration” back in May. About mid June we started work on remodeling our house. I’ve decided it’s been far too long without a post. I am still working on my plans to change things around here, stay tuned!  I currently have 3 paintings in progress with plans for 6 more to fill out my portfolio.

This week is my first full week back in my studio after a 2 month “vacation” to work on remodeling our house to get it ready to sell. We still have a couple of minor things to get done, but we are hoping to have it listed by the weekend. (Not sure how long these things take) I took some “after” photos but only one came out decent, so I will try again for my next post. (Sorry!) I really wish I had remembered to take “before” shots too, because the transformation has been amazing! 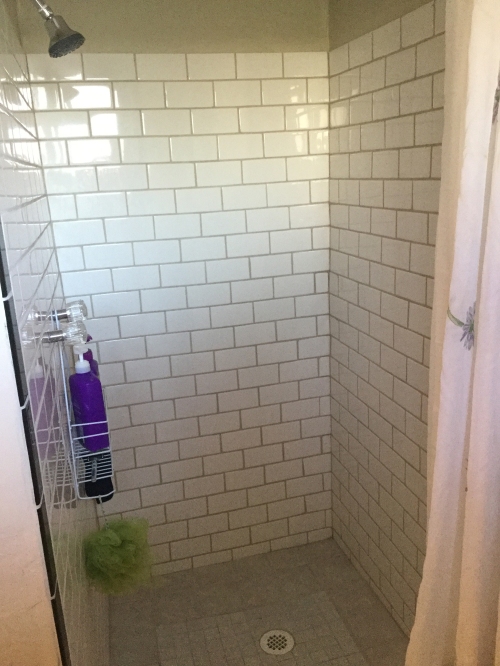 The one photo that came out ok. The new shower in our brand new master bedroom! I did this tile work all by myself! It took me 3 full days of hand shredding work. I must admit, I’m quite proud!

This shower started out as a bug infested back corner of our laundry room. It was used as storage for construction materials for the 10 year period we worked on turning this back closet into a bathroom! What was once a den/storage room/extra room is now a really lovely master bedroom with en suite. It was worth all the work!

Once the house sells, we will get our motor home remodeled and move into it! That dream we had back in 2013? It’s finally coming true! Depending on the house selling quickly, we hope to leave Albuquerque end of October, beginning of November. Our plan is to travel around the country, south in the winter and north in the summer with a month to 2 month stops in Albuquerque in the Spring and Fall.

Why, you ask? Why NOT, I say! Seriously though, we have dreamed of our empty nest years being quite different from our child rearing years. With kids, you have to provide a stable home. Without kids? We can now do all the things that were “unreasonable” when we had kids. My husband is a musician and we play together in a group called “Sunlight”. One of the best ways for performing musicians to make a living is touring. We plan to perform our music all over the country! Once upon a time, when I began my career as an artist, I made a living by traveling (actually my 1st husband did the traveling while I stayed home with our young children) and selling my art at hundreds of shops around the country. I’ve tried the internet route for over 16 years now, and it just doesn’t work as well. Besides, it’s not as much fun!

I’m really excited to step out of my comfort zone! I never have been much of a routine type of gal. I like adventure! I like new sights and sounds and smells. There are so many places I’ve never been, so many people I’ve met online that I cannot wait to meet in person! I hope you will follow us on our journey, it’s sure to be fun!

After the inspiring time spent at Chiricahua National Monument, we took a short drive over to Bisbee, Arizona. This small town is only a few miles away from the Mexican border.

Bisbee was once the largest mining town between St. Louis and San Francisco! In it’s heyday the town had over 25,000 inhabitants. I forget the exact number but I believe there was 30 billion pounds of copper mined out of the hills and underground tunnels beneath Bisbee.

The elevation is 5,300 feet so even though it’s located in southern Arizona, it wasn’t quite as warm as other southern towns in the state. In fact, after only a few days, a cold front blew in and we had wind, a bit of rain and lots of clouds.

We took a tour of the Queen Mine which just happened to be just down the hill from the Queen Mine RV Park. It was an interesting and educational tour, even if it was a bit freaky being underground in the man made tunnels.

Riding the train into the mine

We stayed for a week and had plenty of time to explore around the town. Bisbee has some interesting architecture. It was quite a wealthy town when built back at the end of the 19th century.

Sanitary or “shitter” car down in the mine

Aaron found this to be the perfect photo op! Sitting on the shit car! 🙂

Boss’ quadricycle. This was how the mine foreman got around in the mine’s 2,500 miles of tunnels!

I located a gallery, 55 Main Gallery, that is now representing my art prints. I once sold my Paula Beck prints in the same space! I didn’t realize it was the same place until showing Aaron around the gallery. I found one of my old print racks, designed and custom built by myself with my stepdad’s help back in the early 1990s.The gallery had since been sold to a new owner, but apparently, the print rack came with the space and is still being used to display prints! 55 Main gallery has been in that location for 20 years now. My how the time flies by!

The Copper Queen hotel is at least a hundred years old and possibly haunted. We ate lunch at the restaurant there and enjoyed some live music in the saloon.

We got plenty of exercise while we were there as the town is made up of nothing but hills and stairs! Unfortunately, my bike tire popped while we were in the Chiricahuas and there is no bike shop in Bisbee. So, we walked everywhere and road the town bus a couple of times in order to get our groceries from the only store about 5 miles away from the RV park we stayed in.

Bisbee is famous for it’s stairs! They even have a race called the 1000 stairs race.

After a month on the road, we learned a LOT! We have since decided to return to Albuquerque for a few weeks to regroup and figure some things out. We have a Sunlight show booked in Phoenix for December 6th at the Fiddler’s Dream coffee house. We hope to book a few more gigs before then as well. This adventure is FAR from over, I can promise you that! 🙂