Records, taxes and tenants, oh my!

The past month has flown by, as usual! April has been a month of landlord duties, sorting and moving our record collection, and of course, the dreaded April 15th deadline for filing taxes!

My husband and I own a local business here in Albuquerque called, Chroma Studios. We lease space in two office buildings and then rent rooms out to artists and musicians/bands for private studio/practice space. This month, our largest band studio was vacated for the first time in over 4 years. We had been waiting for this opportunity to build a wall and split this room into two rooms. That is exactly what we spent the first week and a half of April doing. Building a wall, plastering/painting walls and then renting one half of this space to a new band.

The other half of this room is now my husband’s new studio space. Now that he is in a bigger room, we spent the next week or so moving our HUGE record collection into his larger room. Before this, we had half of the collection in his smaller studio and the rest was at our house. However, before we were able to make the move, we had to sort through the entire album collection. We did this because the collection used to belong to my dad. I have talked about it here in the past. After 7 years, we decided it was time to clear out as many records as we could and make it OUR collection. Out of a 40,000 record collection, we were able to cull around 2,000 from the pack. It doesn’t seem like much, but we also cleared out enough to get rid of two shelves! Mostly generic orchestral music and bad 80s dance singles, not to mention double copies, the collection is now 100% music we would actually listen to!

I don’t know if anyone realizes how much work it is to move 38,000 records! It took a full week to move them all and we were BEAT! I think it took at least 2 days to recover! It’s quite the task, first we have to move the records off the shelves and then move the shelves, and once the shelves are in their new space and secured to the walls, the records have to be put back on the shelves. This basically means, for every move we make, we physically move the records at least two and sometimes three times! No fun! Good thing I really loved my dad and those records have a TON of sentimental value to me. Plus, it’s nice to have so much great music to listen to!

Between all that we had to stop for a couple days to get the taxes filed, not just income taxes but the lovely gross receipts taxes we have to file as a business. I love April, can you tell!? Good part is, taxes are done, and Spring has arrived! 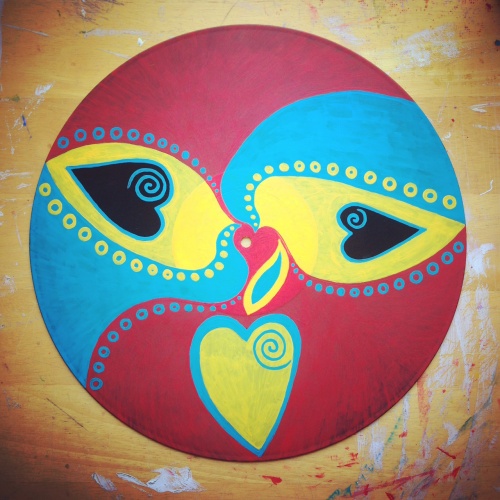 We moved the record collection to the studios because at the same time, we are getting our house cleared out and ready to rent! We are planning on moving into a smaller house soon. Now that our sons are grown and (almost, move out date is May 15th) gone, the house is just too big and too much work for the two of us. 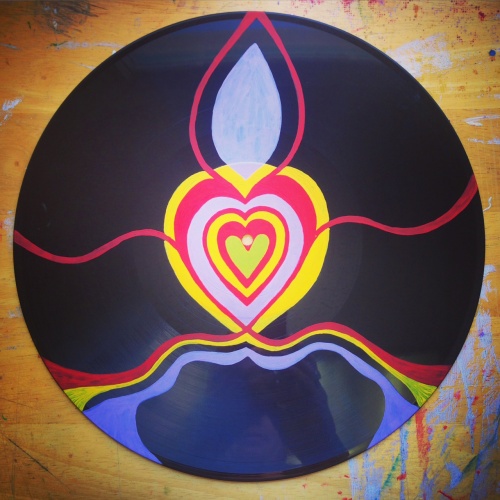 Acrylic on 12″ vinyl, work in progress

This week, I’ve finally been able to get back to my studio and my morning painting time. I have several new paintings in progress as well as a few finished pieces. Looking back at past posts I realize it’s been quite some time since I’ve shared my current work here on the blog! I have completed quite a bit of work in the last two months. I have fallen a bit behind with this task, but I promise to remedy that in the coming days!

Life is so good and I am so grateful! Even when months like this come up and I can’t spend as much time on my art as I would like, I can’t complain.

2014 has been a great year so far! I had planned on continuing my weekly blog posts, but my computer had a different plan. I love my iMac but it’s getting a bit old (6 years this October). I decided to take it in for a checkup and we found out that the hard drive was fried. Long story short, I had to have a new hard drive installed and then had to buy a new external cd drive (the old drive hasn’t worked for years, but I had to get a new one to reinstall my software on the new hard drive). Needless to say, it’s been a few weeks since I’ve had a working computer. It took a few days for our computer guy to retrieve my files from the old HD, luckily I didn’t lose any files! Then I had to wait for the cd drive to be shipped before I could reinstall, yadda yadda yadda!

Today I have my fully functioning computer back! Thank goodness it cost me under $250! Much better than the $1,500 it would have cost for a new computer! 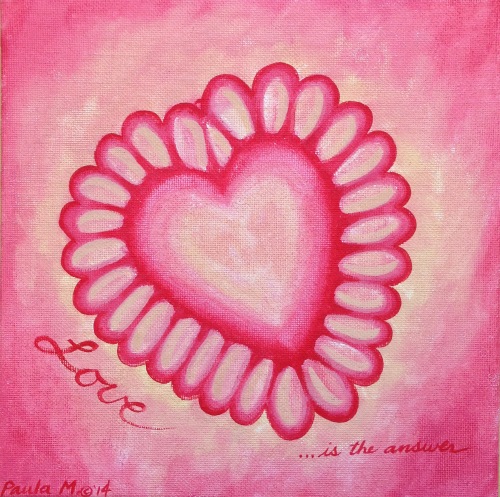 In the meantime, I have been a painting machine! Not only did I complete 8 new paintings last month, I sold 5 of them before they were complete! 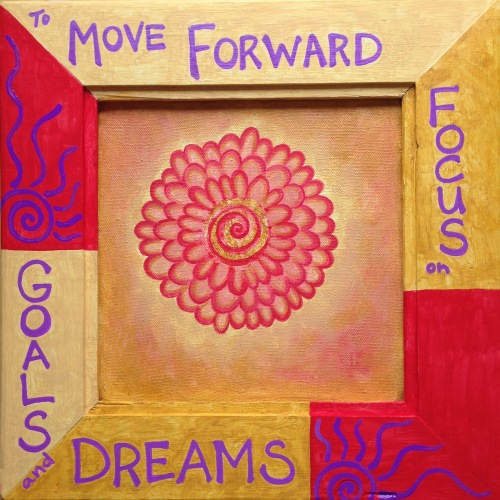 I’m working on a couple of new series currently. One is called “Words” and it’s a collaboration with a good friend or mine. We first met because he was a long time friend of my dad’s. Since my dad’s death in 2008 we’ve kept in touch and last year he came for an extended visit here in Albuquerque. 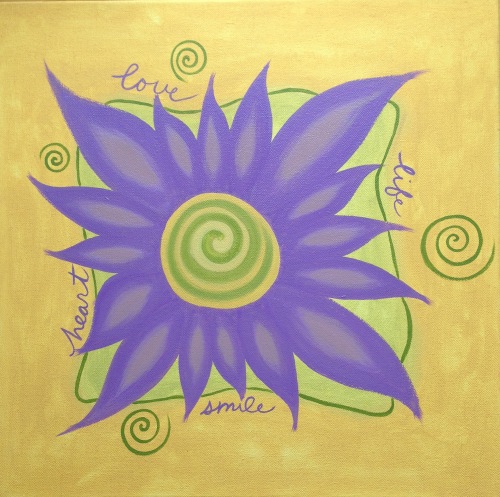 He recently retired and has been writing poetry. We discussed this long before his visit and I expressed interest in collaborating on a book of poetry with my art for illustrations. This is where the “Words” series began.

Honestly, I cannot remember how long we talked about it before I FINALLY got to work on some new art work specifically for this project. At first, I had thought I would use older pieces that fit his themes, but as I thought about it more I decided it would be much better if I included some of the words from his poems/quotes into my paintings.

Last month I painted 5 paintings for this series, two have my words in them not his, so they aren’t really part of the collaboration but I am including them in the series anyway. I don’t currently have my friend’s permission to post his quotes but I will share the paintings that were inspired by them. Remember, the words in the paintings are just a few key words from the actual quotes/poems. 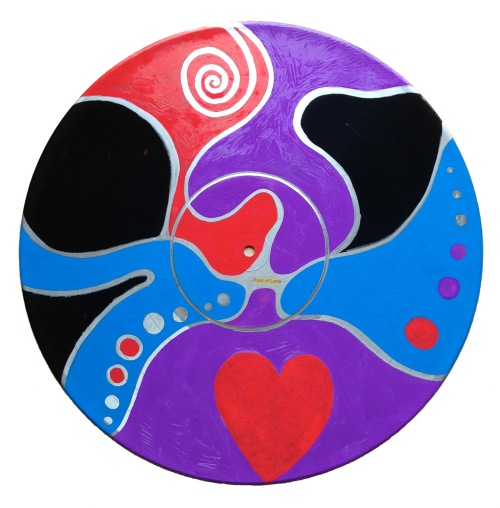 The titles for these paintings are located on the label of the record and I have circled the title on the record and then the painting has evolved organically from the label, sometimes incorporating a design or element from the label itself in the finished painting. I’m really loving this series and apparently so are others as I’ve already sold 3 of them!

Getting my groove back!

It’s been months since I’ve spent any significant amount of time painting. I’ve been busy, with traveling, singing, getting my prints into galleries and life in general. This weekend the urge was so strong to paint, that I brought some supplies home with me and painted while we watched football all day and evening on Sunday. The photos I’m sharing today are the result. These are all acrylic paint markers on vinyl. They are all available for sale. Contact me directly if you are interested in purchasing one or more of them. Thank you so much for your continued support of my creative life! 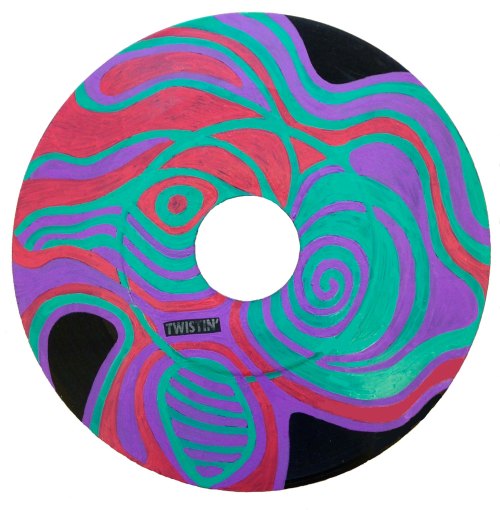 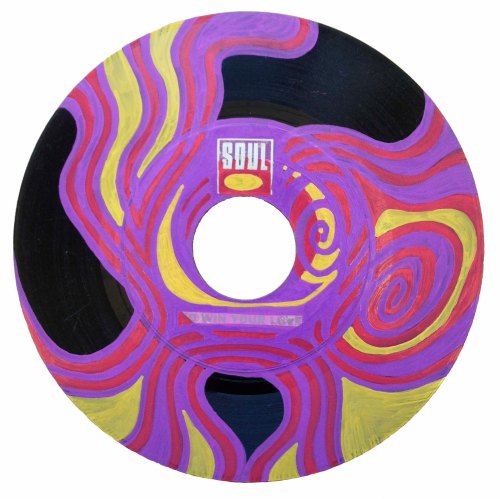 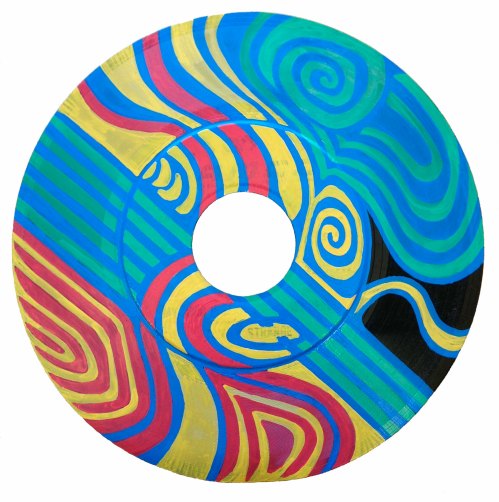 I have been so busy since my last post! Since then, I have been accepted and dropped off paintings for another show at yet another gallery! The same day that I dropped my art off at that gallery, I visited another gallery in another town and have been asked to submit to them as well. I guess you could say life has been good lately! 🙂 I have spent a bit more time in my studio recently, now that I have to get busy painting! I finally got the studio completely set up, with art on the walls and everything! I don’t have any new work to share just yet, though I have completed a couple of record paintings. I want to wait for now and reveal them all at once. Until then, I will share photos of my completed studio and some of the progress photos of pieces I’m currently working on.

Just of few of the projects I’m currently working on, just getting started.

Vinyl record paintings in progress, thanks to Ken at the Fuller Lodge Art Gallery in Los Alamos, NM, I’m trying out painting with paint markers. They work GREAT!

My first coloring tshirt! This is one I colored in to be used as an example on the website where they are being sold.

I’m really excited to announce that my coloring book designs are now available on t shirts! Using fabric paint or markers they can be colored in to make your own design! Endless possibilities! There are 4 different designs available and they are only $20! Check out this LINK to see them for yourselves. 🙂

Happy corner of my studio!

Meditation corner in my studio, I love my meditation chair!

The opening for the show I most recently got into is this coming Saturday in Madrid, NM at Metallo Gallery. It’s a miniature show and 3 of my “All About Love” paintings were accepted. The opening is from 4-8pm on May 4th. If you are in the area, hope you can make it! 🙂

Other side of the meditation corner

Purple wall with 3 of my “Exposed Emotions” series paintings.