Living in the Land of Enchantment: Salinas Pueblo Missions

One of my favorite places to visit in New Mexico is actually split into 3 separate sites. The Salinas Pueblo Missions has three missions, Quarai, Abo and Gran Quivira. They are all located around Mountainair, NM. The Abo ruins are 9 miles west, Quarai ruins are 8 miles north and the Gran Quivira ruins are 25 miles south of Mountainair. I love visiting these sites and imagining a time when they were bustling villages. I wonder how they lived and what they did everyday to survive in this desert environment.

Quarai Mission ruins, the largest of the 3 missions

Because of their remote location, there is rarely more than a couple of people wandering the ruins of any location. The Abo Mission is most visited as it sits near the highway to Mountainair. The Abo and Quarai Missions were built using red sandstone and the Gran Quivira Mission and pueblo was built with white/grey limestone. The red sandstone is especially beautiful when covered in snow.

All three were built during the 17th century during Spanish occupation. Although all sites were built as Spanish Missions, they also included Kivas in their buildings which could have been a concession to the beliefs of the Native Americans who lived there alongside the Spanish settlers. Nobody knows why all three sites were abandoned by the 1670s. My personal guess is they may have been abandoned after the pueblo revolt in 1680, when the pueblo indians from all over New Mexico chased the Spanish settlers out of the area. They would not return for 12 years. I would imagine, like other abandoned sites, water could have had something to do with it as well. 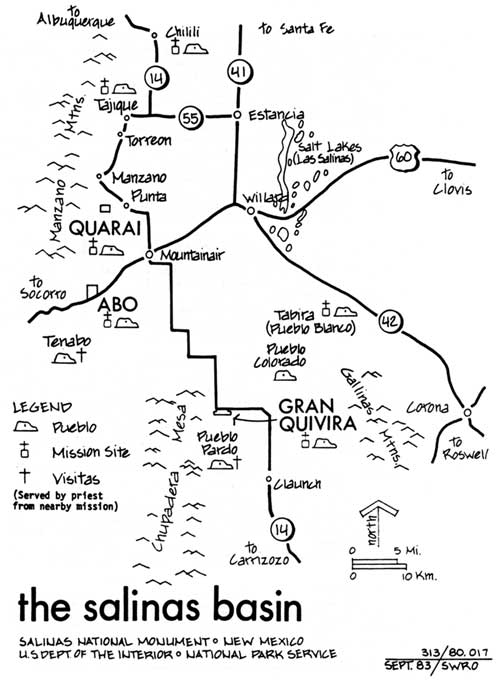 If you are looking for a day trip from Albuquerque, the Salinas ruins are a great choice. Make sure you fill up your gas tank and maybe even take a picnic lunch, as there isn’t much in the way of gas stations and food in the area. Mountainair does have a cafe or two, but gas can get expensive in those remote, rural areas of New Mexico. Pets are welcome, but must be kept on leash and cleaned up after.

Ruins of the Gran Quivira Mission

All three sites are partially handicapped accessible and have handicap restrooms. All sites also have visitors centers with Rangers on hand to answer questions. All sites are open daily, 9 to 5 in winter months and 9-6 in the summer months. Of all the ruins I’ve personally visited across New Mexico, these three are most interesting to me. I highly recommend a visit next time you are in the area!