Series: Living in the “Land of Enchantment” (New Mexico) Bandelier

Looking up one of the several ladders at Bandelier National Monument

This series came about after a realization I came to a few years ago. I grew up in Southern New Mexico and now live in Albuquerque in Central New Mexico. I live in a state that is a very popular tourist destination. I am blessed to live in a place people dream of visiting someday. I live, as an artist, in a place artists have been drawn to for centuries for the quality of light, the gorgeous natural landscape, awe inspiring sunsets, great outdoor opportunities and I could go on and on.

Growing up I didn’t see New Mexico in this romantic way, in fact, I had dreams of eventually leaving. I left three times before I realized how much I loved it here.

When I returned to New Mexico the final time, we moved to Albuquerque, the largest city in the state. We’ve been here ever since (16 years) and I have come to really love my home state.

Part of the reason for this love is the many road trips we’ve taken to explore our state over the past 20 years. New Mexico has millions of acres of National Forests, National Parks and Monuments, State Parks and Wilderness areas, thousands of miles of hiking/biking trails, several ski areas, ruins from past civilizations, modern cities filled with numerous art galleries and museums and did I mention those sunsets!?

Ironically, many people in modern day America don’t realize New Mexico is one of the 50 states. It’s an ongoing local joke. New Mexico became the 47th state on January 6, 1912. 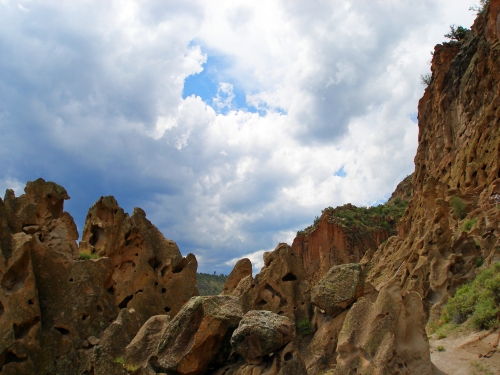 Bandelier is just outside Los Alamos, New Mexico. From the National Park Service website; “Bandelier National Monument protects over 33,000 acres of rugged but beautiful canyon and mesa country as well as evidence of a human presence here going back over 11,000 years.  Petroglyphs, dwellings carved into the soft rock cliffs, and standing masonry walls pay tribute to the early days of a culture that still survives in the surrounding communities.”

It’s been almost 7 years since we visited Bandelier National Monument. The photos in this post were taken then. Sadly, in June 2011, over 60% of the park was burned in the Los Conchas fire and then later, heavy rains caused flood waters that tore through the Frijoles Canyon and Bandelier National Monument. Many parts of New Mexico were burned by massive forest fires and then flooded during that time over several years of drought conditions. 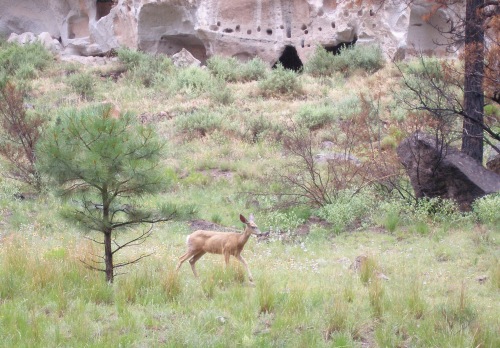 Deer are everywhere in New Mexico!

It will be years before these burn scars are covered with new growth, but it doesn’t take long for new growth to start. Looking back at photos from trips we’ve taken over the years, it’s difficult to forget all the favorite places that were changed by fire and flood over the last decade. Luckily for New Mexico, we’ve since had several years of good precipitation. The fire danger never goes away completely in the high desert mountains. After living here most of my life, it’s something you learn to live with as it’s the forest’s way of regenerating herself. Change is constant in the wilderness.

Looking down into the Frijoles Canyon from the Cliff dwellings

On a brighter note, I’m happy to have these photos and memories of the way Bandelier looked before the fire and I imagine eventually you won’t be able to tell there was a fire there at all.

This is me at the top of the ladder to the “Cave Kiva”. Ladders were how the ancestral pueblo peoples accessed their cliff dwellings.

On this trip, we were playing tour guide to a friend who was visiting from California. We hiked the Main Loop trail up to the cliff dwellings and climbed all the ladders, even the super long, high ladder! It’s such an amazing place to visit, I always feel like I can sense the spirits of the Ancestral Pueblo people who once made this place their home. These special New Mexico spots have always felt sacred to me. They are sacred to most native New Mexicans.

Climbing the long ladder up to the kiva entrance. Not for people afraid of heights!

When you visit, make sure you have comfortable clothes and shoes. Always, always, always bring plenty of water, a hat and suncreen, especially in the summer! 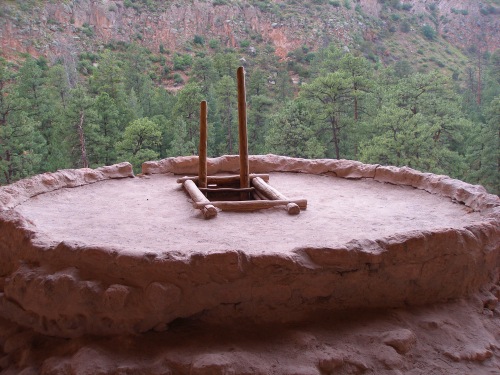