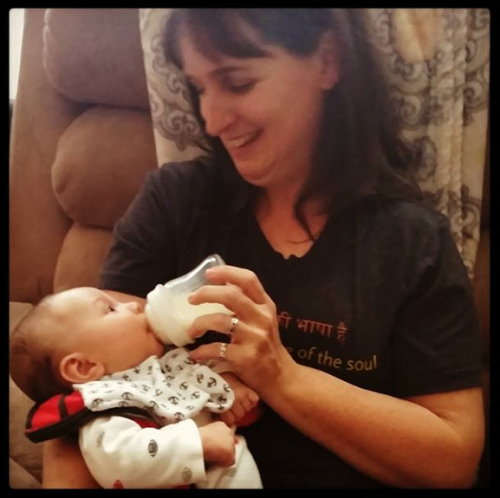 Feeding my youngest grandson, Danny! He is named after my dad. ❤

A fresh new start! I love the New Year, it always gives me that feeling of renewal. A chance to hit the restart button. This year, the new start is personal. We are busy working on getting our house ready to sell. It goes on the market next Monday and we are having a moving sale this weekend. Time to get rid of the old, deep clean, pack up cherished belongings and get ready to move to our dream home! We aren’t sharing where that will be just yet. We have an idea, but we are saving the surprise for once the house is sold and we are on our way! Met with our real estate agent on Tuesday and found out it is now a seller’s market, so I guess our one year wait was worth it. All the street construction is done near our house, FINALLY! Fingers crossed it sells quickly!

Once the cleaning and packing is done, I will get back to my studio and working on my art for the new year. I have another mural coming up in the next month or so, waiting for the tile guy to finish his work before I can start on mine. This one will be down south in Las Cruces, and it will be an interior mural. It will also be my largest mural to date! I’m painting all 4 walls in a pretty large bedroom. Can’t wait!

I also have a show coming up in March at the NM Cancer Center Gallery, so I have a lot of painting on canvas to do to get ready for that.

My two youngest sons with their sons ❤

I hope y’all had a lovely holiday season! I was blessed to be able to finally see my second grandson again last Sunday. Took several photos and was able to hold and feed him. He is looking more like his daddy now. I bought them matching outfits for Christmas. I sure hope they will get the chance to be close cousins. ❤ ❤ ❤

Today’s featured shop is La Loma Studios. You can find her shop at http://LaLoma.etsy.com

When did you learn how to sew and who taught you?

I went into sewing reluctantly. My parents bought me a sewing machine for my 13th birthday because they wanted me to sew my own clothes. They even made me go to sewing classes. I was so mad because what Jr. High Schooler wants to make her own clothes? I didn’t really make any clothes for myself until after I graduated from college and had to pay for everything myself. (Then I became my mother and thought that I could make everything cheaper than what was on the store racks). The funny thing is that I still have that machine nearly 30 years later. And I still use it (along with an industrial machine I bought a couple of years ago and a serger that’s probably 20 years old).

What was the first thing you remember making?

I think I made an apron in a home economics class. Again, not because I wanted to, but because I had to.

Your profile page is blank, tell us a little about yourself?

I am a native Southern Californian (one of the few). I did go up to Oregon for college (which may explain why more than a few of the shops who have “heart”ed me are from that state).

Do you have a “day job”? If so, what is it?
If not, what other jobs have you had? I have several “day jobs.” I take care of my family and extended family members as well as manage family property. I am also involved in my son’s school and volunteer for a couple of local organizations.Before my son, I was a journalist then a publicist (working in fashion and entertainment). What I am doing now is more enjoyable and fulfilling.
Is there anything else you would like people to know about you?
I love fabrics! I live only about 15 minutes away from LA’s garment district, which includes a lot of fabrics shops. It’s hard to go down there and not buy fabric just because I like it. I keep telling myself, “just buy what you need.” I also have a hard time throwing away scraps of fabric — who knows, I may need it in the future (do you sense a bit of a disorder here?).The other thing to know about me is that I change my shop announcement everyday. I include my thoughts on what I read in the newspaper or what crazy thing my son did. I don’t really know if people read my musings. I ask them to convo me with their thoughts, haven’t had a response yet.